listen (sample track by anna ondaatje)
Taught by Christian Hawkey and Rachel Levitsky, Recuperative Poetics features a week of classes interspersed with poetry writing workshops and guided creative interventions conducted by students, culminating in a final audio/sonic presentation. Our first pedagogical goal will be to introduce ideas of cultural sustainability and recuperative poetics, i.e. the importance of locating aspects of culture that are in danger of being lost or elided due to any number of different material and ideological forces: the simple “progress of time”; the relentlessly forward program of techno-capitalist innovation, including the waste and “junk space” produced by such a program; the continued obsession (informed in part by this program) with “newness” and “originality”; or the process of consolidation and reduction that takes place within institutional and bureaucratic structures, whether cultural or governmental or corporate.

This will ultimately involve an examination of the ethics behind recuperative actions and interventions: what deserves to be remembered, recuperated, saved, or re-animated? Why? How do we make this determination? How do we re-inscribe past potentials in ways that don’t simply funnel such potentials into mainstream culture (this is why recuperation is usually, and rightly, seen as negative), but rather complicates them, amplifies them, or preserves their singularity by creating new singularities, new sites of flourishing, opposition, freedom. To this end we will introduce various recuperative strategies and writing practices (investigatory methods, sustained looking practices, notetaking, field books and field recordings, generating productive fictions and meta-fictions, approaches to site-specific research, and ways to represent or map archives).

Third, we will tackle our common site of investigation and recuperation: The Woodberry Poetry Room audio archives. We’ll explore the history of sound recording technology, and the institutional history of the archive itself. Next, we will begin to examine some of the key questions at stake in the archive, in recording technology, and in the discourse of poetry: What happens when sound is separated from source, when articulation is divorced from hearing, source from acoustic artifact? What aesthetic regimes and/or value systems and/or cultural frames are made sensible in the various ways poetry is recorded? Is there an emphasis on sonic purity, on the reduction of noise? What ideological forces are behind such recording procedures—i.e. is the idea of an “organic” equivalence between voice and presence somehow re-inscribed in a technology that inherently troubles such a link? What is phonic or sonic textuality? Is recording a form a publication? Are there recordings of poems that only exist as a recording? Do recordings accent a given poem in ways that exist outside the textuality of meter? What role does the author or performer have in this? And if audio performances of poems represent re-iterated versions of a nonexistent “original,” then how can the archives be utilized–re-recorded, played with, re-mixed–in ways the carry on this tradition? Who has been recorded in the archive? Who has not been recorded? What “voices” are missing? Why? Can they be—via the necromancy that technology allows—be added?

1985. Rita Dove gave a reading at Harvard, recorded and now available on The Woodberry Poetry Room’s website, in which she read her poem “Parsley” in two parts.

“Parsley” deals with “The Parsley Massacre” of 1937. Rafael Trujillo, then dictator of the Dominican Republic, ordered the execution of 20,000 Haitians living on the Haiti-Dominican Republic border. Trujillo’s soldiers determined who to kill or not depending on their ability to roll the r in the Spanish word for parsley, perejil. The Haitians, who spoke French, presumably could not.

1939. Ezra Pound gave a reading at Harvard, also recorded and available on The Woodberry Poetry Room’s website. In this famous reading, Pound implements kettledrums and recites his verse with an unparalleled bravado, which includes an adamant rolling of all his r’s. In one Canto, the one dealing “With Usura,” the r’s nearly overtake the poem, making it close to incomprehensible.

2012. Myung Mi Kim once described being Korean-American as “placement between l and r” as no r sound occurs in Korean, even if it is often romanized as such. I say this not to inscribe personal experience into these politics, but as a way of explaining that I myself cannot roll my r’s. So I asked a friend, Avik Maitra, to record himself reading Pound’s “Canto XLV,” rolling his r’s in place of saying the words. I thought that this rigorous, exaggerated rolling could be used somehow to neutralize the aggressive r’s of Pound’s poem.

This project is a study on the pronunciation of r, collaging the recordings of Pound, Dove and my r-rolling friend, to chart the strange social life one letter can lead.

The voice slips out shakily, the page turns, the crowd shuffles in their seats. The voice lights a cigarette, takes two puffs, and stabs its flickering eye to sleep. The voice thinks for a minute. You can’t tell whether the voice is a woman: what does that change? The voice stutters, but won’t forget the poem, stop being so anxious. The voice is in the crowd; the crowd is the recording, the crowd in the voice. Is a recording a voice? The voice is telling you this, so you have to believe it. Even with the hum of the earth in the background, the voice is magical. It sits on your shoulder, like a cricket. You will never hear this in a different voice again. It will stay in your head, unchanged, over the years, reemerging from the deepest folds of the brain the next time you see this, to read it for you, again.

In the Absence of the Poet
Anna Ondaatje
listen

An unexpected thing happened when I played the piece for an audience. They began to laugh along. The laughter was contagious, alive. I was initially interested in capturing that feeling of straining to hear a voice when all you can hear is everything else—the buzz of a radiator, the murmur of a crowd, the rustling of papers and the creak of listeners shifting in their seats—and the poet’s voice turns into an unintelligible hum. It didn’t capture that, but I’d found something better. I had represented the life, the aliveness, of an audience. The electric, carbonated power of living.

This piece started with two desires: to the find the voice of Langston Hughes, and to remove a large cardboard box from my room. I discovered Hughes’s poem “Final Call” and was eager to hear it read, but it did not exist in the Woodberry Poetry Room. I also have a pathological fear of the sound of cardboard. This piece is a fusing of my emotions towards boxes and the complexity of recovering the past. I imagined history as something that comes in a box, that is delivered to us, and we slowly we take out the contents. What do we do with the parts of history that are undesirable, which I see as in some way related to the box—the frame—itself? Do we throw away the box, dismantle it, tear it up? Can we? And what do we do with the parts that have been lost, that deserve to be saved, such as a reading of “Final Call” by Langston Hughes?

If poetic collage involves borrowing from an intact text to create from its snippets, then Sappho is a poet collaged by time. Her body of work is a ravaged one; the shreds of papyrus that bear her ruptured words fragment her as much as the critics—Greek, Roman, Victorian, and nearly everyone in between—who, out of social disapproval (not to mention prudishness) would accuse her of aberrance or distort the meaning of her poems. In tenderness for her I want to perform a restorative gesture, sew her back together, give her a voice. On one hand, it is impossible that she be in the archive, and on the other hand, this is what I am attempting. I want to recuperate the white noise of silence, time, scholars and critics layered over, under, and around her voice, a voice constructed out of fragments, inscriptions, reinscriptions, traces, and which glows with integrity and beauty through the haze.

In 1964, John Berryman published a small book of poems entitled the 77 Dream Songs. Running a needle over the grooves of the his own skull, Berryman follows in the confessional tradition, taking the intimacy of his passions, dreams, and nightmares and “singing” them into the outside world, via a peripatetic and polyphonic speaker named Henry. My final project explores the problematics of the archivization of decomposition and the possibility of reciting the Dream Songs in a manner true to their form and content. In the series of recordings that follow, I repeatedly read Berryman’s “Dream Song 5,” each time having imbibed more alcoholic beverage. What begins as restrained performance soon degenerates into an erratic and inebriate peroration, “confessing” my inner life, my “dreams” that are normally quelled in instances of self-conscious performance. By recording the body in a particular moment of weakness, I ask, “Is it possible to draw the inner workings of the mind out into the foreground through institutionalized recitation, archiving the dreams that exist in the dark chords and pregnant strata of song?” While giving a poetry reading at Harvard in 1966, Berryman told his audience, “This is not a cultural occasion. No instruction is taking place. It’s all entertainment.” Whether or not instruction actually takes place I will leave for you to decide, but I can assure you, this recording is all entertainment.

Please enjoy Pablo Neruda’s poem “El tigre” and extracted lines from Aurora Reyes’s “Madre nuestra, la tierra.” By preserving Neruda’s and Aurora Reyes’s voices, I have both made these figures larger than themselves and, paradoxically, have violated the sacrality of the moment in which they were spoken—that one-time present, a singular and unique performance that I have made (potentially) infinite through digitization. The raspy crackling of the aged record points to my nostalgia for a moment I never lived, and for the singular moment of my listening to the LP and thinking and feeling—or maybe only wishing—that the act brought me closer to Neruda. Coyolxauhqui, the dismembered Aztec goddess and sister to the warrior god Huitzilopochtli, provides the filter by which I read Reyes’s poem. Perpetually crying, she is La Llorona. Perpetually crying, she is always being heard and causing pain to her mother, Coatlicue, to whom “Madre nuestra, la tierra” is addressed. 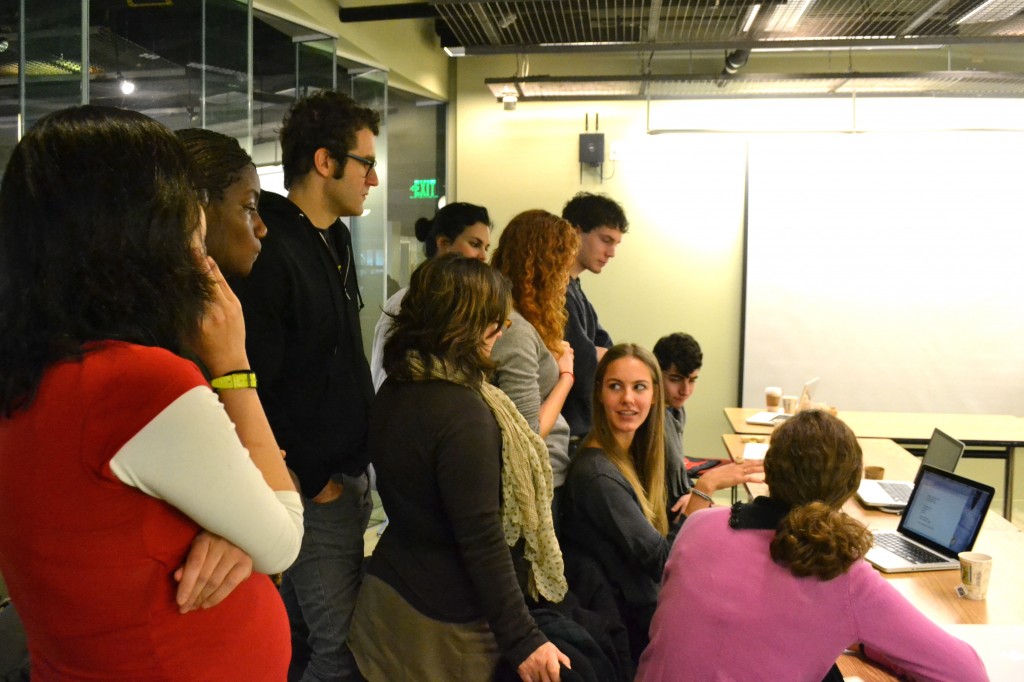 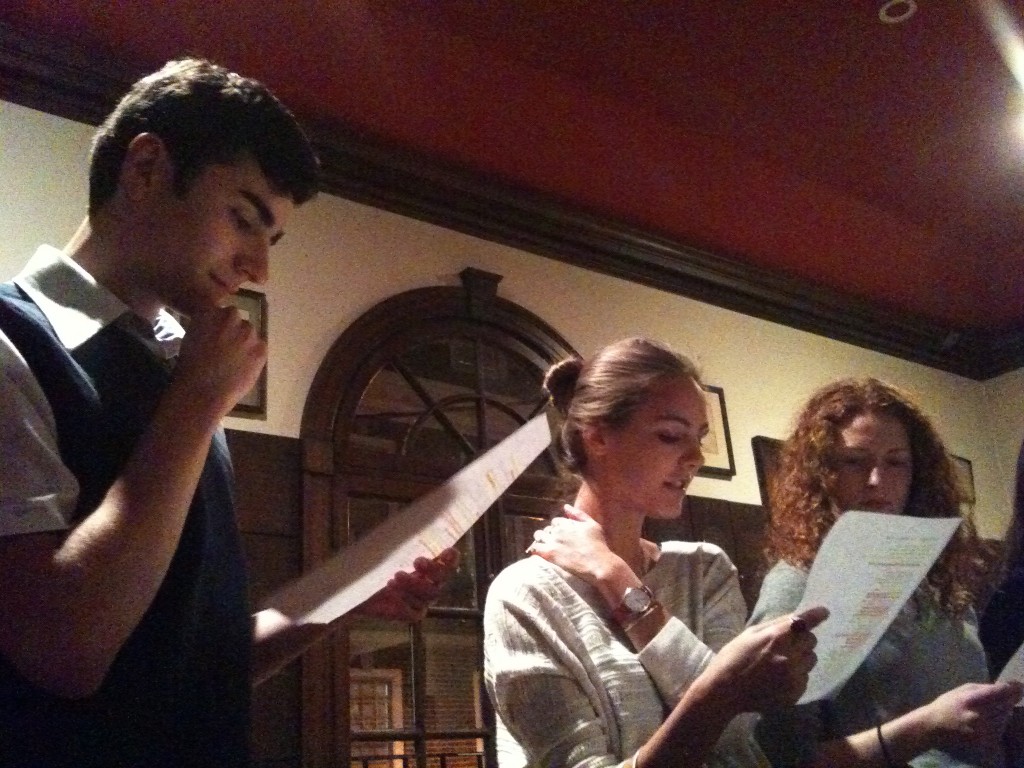