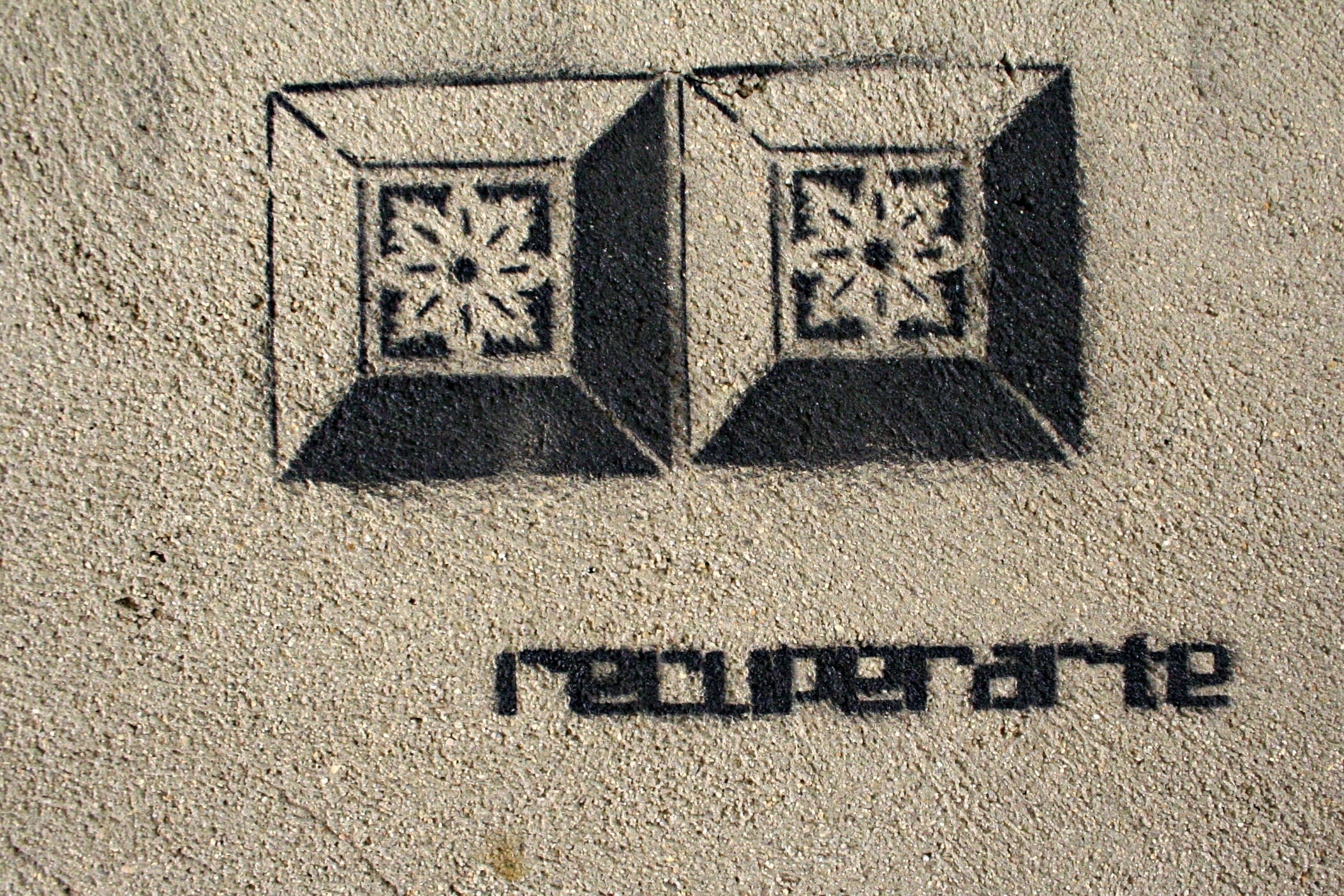 Maria D’Almada is a Portuguese activist, media theorist, educator, and artist. She lives and works in Lisbon. This conversation was conducted over Skype on December 4th, 2012.

OoRS: I discovered your work because a German poet named Barbara Köhler had visited Lisbon and photographed some of the stencils on the walls of buildings and sent them to the German poet Uljana Wolf, who then saw the word recuperarte and passed on the images to me.

Maria D’Almada: Yeah, I did identify with the name of your collective. I recognized myself in OoRS.

Yes, we’re interested in your artistic practice because it’s interventionist, research-based, transformative. How did this project come about?

I can tell you the process, of course. I’m Portuguese, but not from Lisbon, although Portugal is a very small country. We go to Lisbon a lot. It’s a familiar town to, I’d say, most of the Portuguese or at least to the younger generation. Everything happens in Lisbon, and when I moved there 8 years ago I spent more time walking in the city.  So this of course often happens:  you think you know a place but when you really look at it with other eyes you start to notice new things, new details. In my small hometown you have tiles, but not that much. I wanted to tell you that the origin of the tiles in Portuguese architecture has to do with humidity. No, not humidity. I don’t know how to say it.

Yes, that’s the right word. I’ve been to Lisbon in the summer. It’s a wet, rainy, humid city.

Yeah, and so in Portuguese coastal cities with this weather you also have a lot of tiles but I had this artistic idea of tiles in a representational form; I don’t know, in churches everywhere in the country and in my home town you have a lot of representations of people, places, activities—all this was represented, painted. But this thing of the square, the unit, this grid-like pattern: it’s unique in that you repeat it over and over on huge walls. This decorative tradition thrives in Portugal. You have the stones in the floor and streets or the wrought iron protections and gates on windows and doors that create patterns. 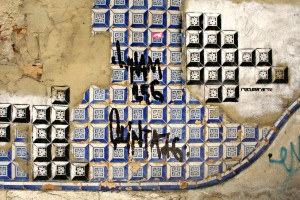 I had this kind of mental recognition of this value, and that maybe it was being forgotten. At the same time, I was starting to understand the deterioration. Okay, so it’s normal for an old building that has tiles, if it’s not properly maintained, to deteriorate. If you see the holes or missing tiles you first think, Well, that’s life. But in Lisbon these tiles are a resource for the black market. Someone who needs money can try to rip one from an abandoned building in the historic district, and try to sell it to an antique shop. And there are a lot of people interested in buying. So part of my experience was actually going to our flea market in Lisbon, and when I saw tourists buying them, I couldn’t resist, and I would go near them and tell them, “Don’t buy that, because they steal that from the walls. This way they’ll just keep doing it.” I prevented some people from buying them and I keep doing it when I see the opportunity. I also heard that the police here decided to have a program where you can tell them when people are stealing and they’ll try to do something. The authorities are trying to do something, but  at the time I thought that people were not aware of what was happening. So I’ve had it in my mind for a while, thinking this could be a good idea. “This is this intact unit, or square.  I think I could stencil some.” I just went to Youtube to try to understand how I could do one myself. That was it. I decided. I also knew this one place, in the historic center, and it has a lot of tiles and a lot of buildings with tiles. There are also not many people at night, so I would feel more comfortable doing it. I was trying to get people to notice their walls somehow.

I like your idea that tiles, 16th century tiles, are basically a form of street art, or public art, and your chosen media is stenciling and graffiti, with graffiti at least being a late 20th century public art form. They comment on each other in interesting ways. When I first saw the photograph of the stenciled tiles continuing the pattern of the centuries-old tiles I thought—

—it is a weird feeling. There’s a disturbance, a kind of sharp melancholy, because it’s beautiful on a design level—how your stencil’s continue the pattern—but at the same time one is made aware that a particular cultural heritage is disappearing. The stencils ornament an absence of ornamentation. Has there been any public response in the city to what you’re doing? 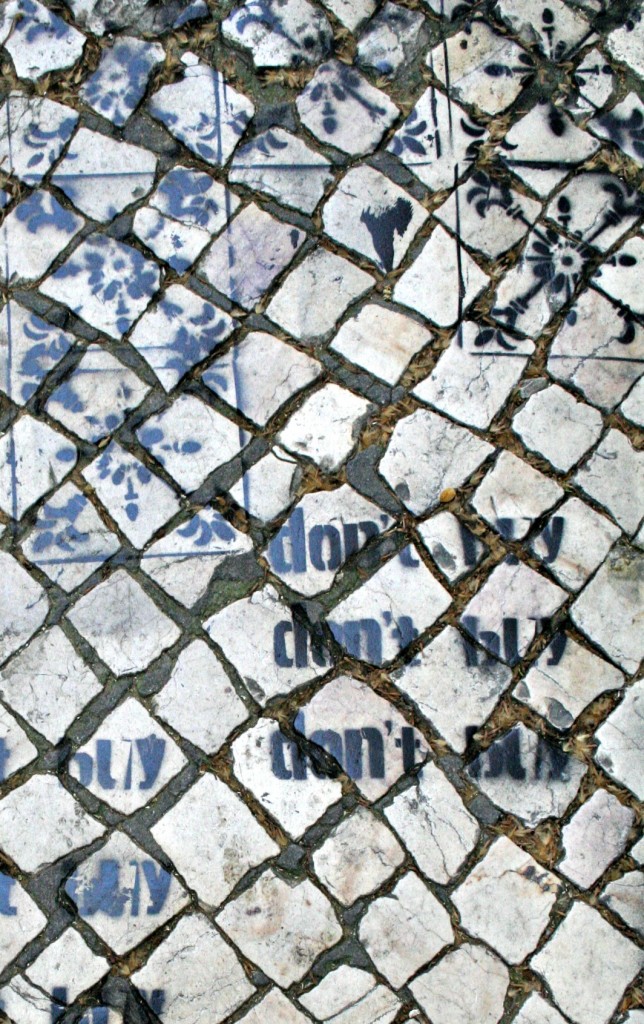 Yes, there was. I arrived in Lisbon in 2006 and in 2008, in the beginning of the year, I started to go to the places where I saw the holes, and I would stencil. Some of the original tile drawings are very intricate and it’s hard to create the stencil. If I was a great designer with the right tools, I could do it, but I tried to keep it very simple. So I did a few in the beginning of 2008, and one of them was noticed by Rosa Pomar. She’s a Portuguese handcraft artist.  She has a very famous blog, and she passed a wall, took a picture of one of the works, posted it on her blog and linked to my Flickr site, to a picture of a stencil I had made at the entrance of the flea market, and it simply says “Don’t buy.” Suddenly I had massive numbers of hits! And then someone who works for a major newspaper here in Portugal asked to do an article about it, and suddenly I had three pages in the Sunday magazine. I showed it to my parents and I said as a joke, you know, I have to do this kind of illegal stuff to get in the newspaper! But I didn’t allow my face to be printed. It’s not really about me. I’m not an artist, you know, it’s about the tiles.

Have you run into any legal or police trouble?

One of the first interventions I did on a wall was one I did two times. I went there one night and I started, but because it’s a big place, a huge wall, I decided to go there again. So the second time I was with two girlfriends. Then two guys approached, like regular guys, because they heard the sound of spraying, I guess. And they were like “Oh what are you doing?” And I said, “Well, if you want to know, I’m doing this,” and I showed them what we did the previous night. They didn’t seem dangerous or anything, it was like 1 or 2 o’clock in the night, not that late.  They seemed sober. Then they showed their badges, they were cops! However they started to ask, “Why don’t you cover the whole area? And why don’t you paint it in the same color?”

Those are good questions! You seem to decoratively extend a pattern only a little bit, as if to highlight its absence.

Yes, of course, that’s it. If I did the same color and everything, no one would notice.